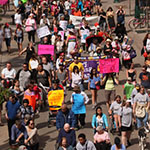 The word “pride” is often associated with LGBTQ+ pride, mainly because of its cultural relevance and long history, both in the United States and Canada. Disability Pride Alberta is often confused as being directly associated with the LGBTQ+ pride movement, even though they are not. However, pride is something used by a variety of groups, and it means different things to different groups.

Oxford defines pride as “confidence and self-respect as expressed by members of a group, typically one that has been socially marginalized, based on their shared identity, culture, and experience.”

Here’s how different groups have adapted pride and used it to counter shame and oppression towards them.

While the oppression of LGBTQ+ people was and continues to be a worldwide problem, many pinpoint the beginnings of the gay pride movement to the United States in the 1960s, with the Stonewall riots. A police raid on the Stonewall Inn, which was one of the few places to welcome gay individuals at the time, erupted into protests and retaliation against police. The residents of the area organized into activist groups, seeking to finally establish places where LGBTQ+ people were free to be open about their sexuality without fear of being arrested. In Canada, tensions were similarly building between the LBGTQ+ community and law enforcement, particularly in 1976 when police raided bathhouses in Montreal. The first official LGBTQ+ pride marches and festivals were held in Montreal and Vancouver in 1979, a revolutionary act that made LGBTQ+ Canadians more visible than ever before.

For the community, pride has always been about visibility and demanding better treatment both legally and socially. Calgary Pride’s vision is, “Our city, free from discrimination against gender identity, gender expression, and sexual orientation.” While pride surrounding sexuality and gender can be very personal, it also continues to be a worldwide movement towards equality. Stemming back to the beginnings of LGBTQ+ pride, sub-movements like the Dyke and Trans March (in Calgary, Treaty 7 Dyke And Trans March) or racial minority groups (like Calgary’s YYC Voices) advocate for the interests of those they represent, whose voices are often less heard within the general LGBTQ+ pride movement.

Similarly to the LGBTQ+ pride movement, black pride is in response to the dominant culture – where LGBTQ+ individuals fought against a dominantly heterosexual culture, black pride is in response to a dominant white culture within society. It was a bi-product of the Civil Rights Movement of the 1950s and 1960s in America, which included the overturning of multiple racist laws that were in place due to the United States’ history of slavery.

To understand the modern context of black pride, it is important to understand the history of the movement. Particularly in the United States, but also in Canada, many of the legal and social structures are built how they are because of a racist past, from beauty standards to education. In Canada, you can find many Indigenous groups who seek to stand up against colonization similarly to black pride in the United States. Both movements seek to break down the structures that were built to unfairly disadvantage them and gain more visibility on a mainstream stage – advocating for equality and a radical re-imagining of how countries are built to oppress various types of people.

The first-ever Disability Pride Parade was held in Boston in 1990. While disability pride and parades are a relatively new concept, the ideas are rooted in the same foundation as movements like LGBTQ+ and black pride. In 2013, Chicago’s Disability Pride Parade defined their mission in three ways: “To change the way people think about and define “disability,” to break down and end the internalized shame among people with Disabilities, and to promote the belief in society that Disability is a natural and beautiful part of human diversity in which people living with disabilities can take pride.”

Disabled individuals still face many structural, legal and social barriers within society today. At Disability Pride Alberta, we have a mission to celebrate and empower the disabled community. Hosting community events provides an opportunity for people with & without disabilities to celebrate diversity, inclusion, and pride. Many people have disability stories that they seek to share with the world, as 1 in 3 Canadians have a connection to the disability community.

Want to get involved?